This authentic American corn Vodka is created in the spirit of the Key West Ship Wreckers. Bold and adventurous in spirit. Old world tradition with a modern twist utilizing the patented TerrePure process to ensure purity of heart. The Key West Trading Co. has created this “Aqua Vitae” (Water of Life)...READ MORE 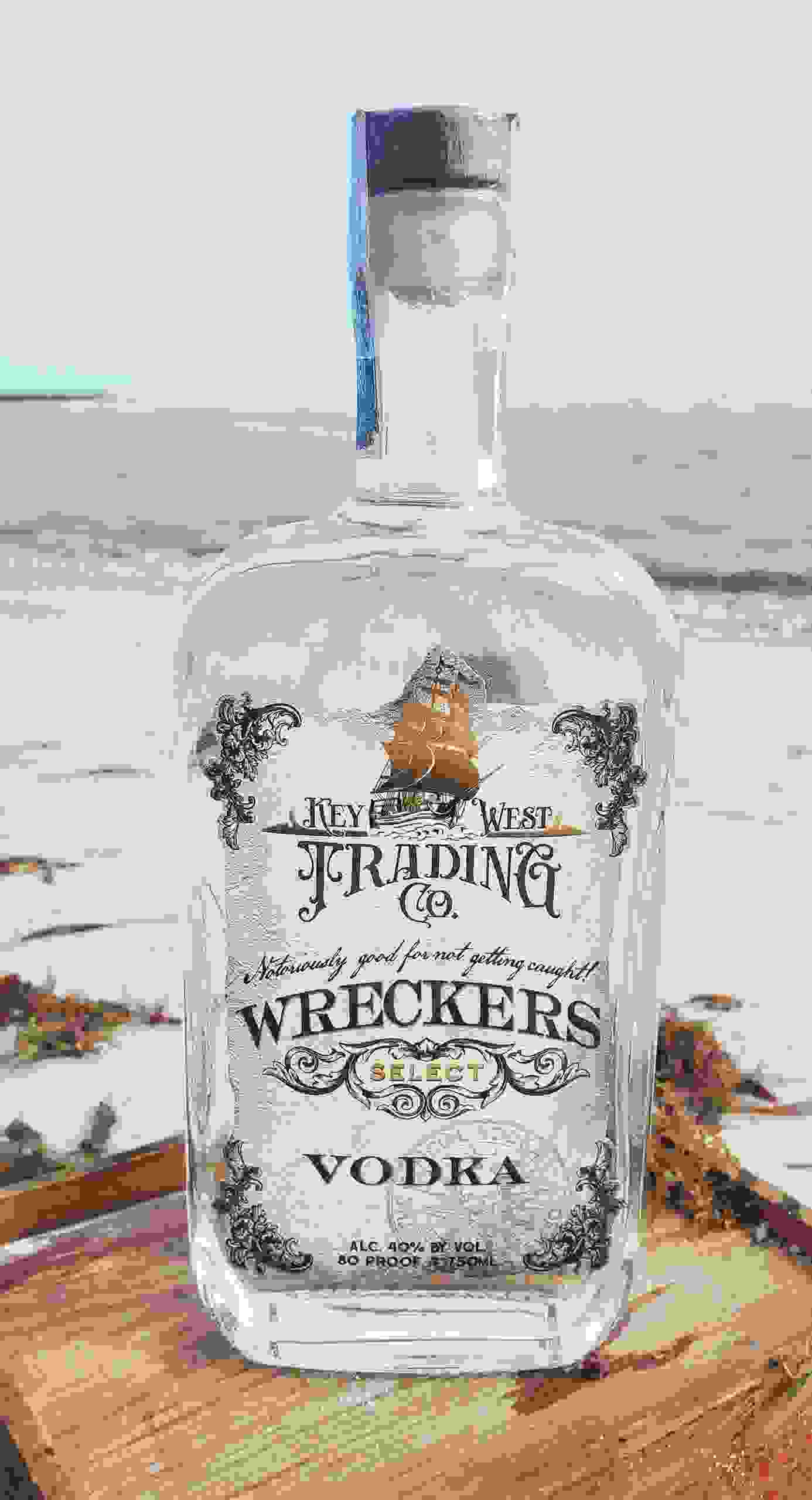 This authentic American corn Vodka is created in the spirit of the Key West Ship Wreckers. Bold and adventurous in spirit. Old world tradition with a modern twist utilizing the patented TerrePure process to ensure purity of heart. The Key West Trading Co. has created this “Aqua Vitae” (Water of Life) to increase fertility and awaken lust as originally described in the 1534 work of Stefan Falimerz. Wrecker’s Select Vodka is highly recommended for your “Island Consumption” pleasures.

In 1815, fishing boats from New England began visiting the Florida Keys in the winter to fish for the Havana market. These fishermen engaged in wrecking when the opportunity arose. With the acquisition of Florida by the United States in 1821 and the settlement of Key West in 1822, the New England fishermen-wreckers began moving their homes to Key West. Conflicts quickly developed with the Bahamian wreckers. U.S. Navy ships stopped and boarded Bahamian wreckers to check papers and arrested two Bahamian captains on suspicion of smuggling slaves. American wreckers became increasingly hostile to Bahamian wreckers, and in 1825 the U.S. Congress passed a law requiring all goods salvaged in U.S. waters to be taken to an American port of entry. This measure created a great inconvenience for the Bahamian wreckers, as they had to take salvaged goods and ships to Key West before they could return home to the Bahamas. Some of them soon moved to Key West and acquired U.S. citizenship.

Key West had become a port of entry in 1822. In the same year the U.S. Navy chose Key West as its base for suppressing piracy in the West Indies. The city quickly developed into Florida's most important port. By the 1830s Key West accounted for 60% to 90% of imports and exports for the Territory. Most of this traffic was due to the activities of the wreckers. Warehouses for storing salvaged goods, shipyards for repairing damaged ships that had been removed from the reefs and for building vessels to be used in wrecking, and ship chandlers for refitting ships all contributed to the city's prosperity.

In the 1820s and 1830s Indian Key functioned as a secondary center for the wrecking industry in the Keys. Closer to most of the reefs off the keys than Key West, Indian Key enjoyed a brief prosperity before being destroyed in a raid by Seminoles in 1840.

Wrecking in the Florida Keys was conducted from sailing vessels. Numerous vessels would patrol along the Florida Reef looking for wrecks. The wreckers would normally anchor at night in protected anchorages along the Keys, and then sail out in the morning to see if any ships had wrecked during the night. As a result, a ship that ran on the reef during the night might attract a dozen wreckers by the afternoon of the next day. The first wrecking captain to reach a stranded ship became the wreck master, determining how many wreckers he needed to help salvage the ship, and directing the operation. Wreckers had an obligation to save passengers and crew of the wrecked ship (for which they received no compensation), and to salvage as much of the cargo as possible, and the ship, as well. If the judge in Federal court decided that a wrecking crew had not done everything possible to salvage cargo and ship, he would reduce the award.

The salvaged cargo and the ship, if it could be saved, were taken to Key West where they were appraised or auctioned. The wrecking vessels and crews that participated in the operations would then be awarded a share of the salvage value.

Half of the salvage award went to the owners of the wrecking vessels, divided among the boats on a tonnage basis. The other half went to the wrecker crews, proportional to the number of crewmen on each vessel. Ordinary crewmen received one share, "boys" a half-share, cooks, one-and-a-quarter shares, and captains one to three shares, depending on the size of the vessel. Divers, who dove into the flooded holds of ships to retrieve cargo, received extra shares. By the time a salvage award was divided this way, individual shares were often quite small. Contemporary observers estimated that wrecking crews on average made no more than an ordinary seaman.

In the first few years after Florida was acquired by the United States, salvage awards were determined either by prior agreement between the wreck master and the captain of the wrecked ship, or by arbitration. As the persons available to serve as arbitrators usually had ties to the wrecking industry, if not a direct business relationship with the wreck master and/or the owners of the wrecking vessels, the process was often abused, with awards as high as 90% of the salvaged value. In 1829 a United States District Court was established in Key West with admiralty jurisdiction, after which most salvage cases were decided in court. Court awards for a wrecking operation averaged about 25% of the salvage value. Private agreements and arbitration remained an option, however, particularly when the judge was not available. A visitor to Key West in the 1880s reported that the United States District Court was in session almost every week, and had heard more than 700 Admiralty law cases during the preceding year.

Wreckers were required by the Federal law to carry equipment that might be needed to save cargo and ships. Such equipment included heavy anchors for kedging (hauling) ships off reefs, heavy hawsers and chain, fenders and blocks and tackle. Wreckers also had to be prepared to make emergency repairs to ships to refloat them or keep them afloat while they were sailed or towed back to Key West. By the middle of the 19th century windmill-powered pumps, and later a steam-powered pump, were kept in Key West. If the wreckers were not able to pump out a ship fast enough to float it using the ship's own pumps, they could rent one of the large pumps from Key West. As the wrecking vessels could not always directly approach wrecked ships, they had to carry sturdy boats.

Cargoes saved by wreckers varied tremendously. Cotton was perhaps the most valuable bulk cargo. A bale of cotton might be worth US $50 or $60 in Charleston, South Carolina, but a bale pulled from a flooded hold would be saturated with water, and weigh as much as half a ton. Unusual cargoes salvaged by wreckers included the fossilized "Hydrarchos" skeleton collected in Alabama by Albert Koch, and a locomotive. In 1827 Guerrero, a Spanish slave-runner carrying 500 African captives, and the Royal Navy warship HMS Nimble ran onto the Florida Reef during a running gun battle. Wreckers went to the aid of both ships.

After most of the Africans and the Spanish crewmen had been transferred to wrecker vessels, the Spanish crewmen commandeered two of the ships and sailed to Cuba with most of the Africans. The remaining 120 Africans were taken to Key West, and then to St. Augustine. After Congress passed a special law the next year, 96 surviving Africans were sent to Liberia.

Please do not share with anyone under the legal purchase age for alcohol.